Barb’s third RV book will be on tour  ‘north of 60’  summer 2011. Bigger in scope than the other two books, it is although similar size at 223 pages. With 30 pages of colour photos, and fascinating stories from the north Barb and Dave will take you on a journey into Canada’s wilderness.

Listen to the locals’ stories, laugh over the Rees’s escapades, find out where Canadian history really started, and learn the best places to see. The resource section offers valuable information on: Where the sani-dumps are, boondocking spots, tourism offices, and preparation tips.

April 5, 7:00 at Breakwater Books in Powell River, Barb and Dave will launch “RV Canada’s Far North on a Dream.” The evening includes a travel show “Grizzlies and Gravel Roads North of 60.” If you don’t live in Powell River, find out when the Rees’s will be in your town with their show. 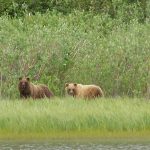 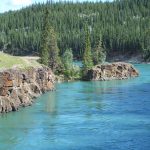 But the highlight of the trip awaited  us in the most unexpected place. As we drove around The Rock, a car was tail-gating us and Dave hates tail-gaters so he pulled over to let them pass. Instead of passing they pulled alongside,  and two First Nations women ask, “Who’s the writer?” On Boo’s back window a sign says, “BC Author on tour” Dave points at me and says, “She is.” Without any explanation they say, “If you want stories, follow us” and take off. Stunned, we look at each other. “Well you said you wanted stories,” says Dave. “Follow that car,” I say.

We have no idea where we’re going but soon we are in the Ndilio First Nations Community (not a reserve). Ndilio (pronounced Dilio) means ‘end of the island.’ We pull into a yard, and introduce ourselves. Diane and Loretta brought us here because their mom Muriel wants to write. On the way Diane called mom on her cell phone and told her she was bringing a writer home. Unlike us whites who need lots of warning to prepare for company, aboriginal peoples take it all in stride. Remembering what the Tlingit taught us about being on Indian time, we are open to whatever the universe has in store for us.

By the time we entered Muriel’s kitchen she already had the big yellow mixing bowl out and started making bannock. The tea pot sat in the middle of the table,and for the next two hours folks dropped in for tea or ask something. Those were the richest two hours!

Muriel, a widow of 10 years tells us about her brother George Blondin, author of four books. As we drink tea, Muriel mix’s raisins into the bannock and tells us as a medicine woman she wants to write the female version of her peoples’ legends. Her mother passed on the knowledge before she died at 94. Her grandfather known for speed, left camp with his dogs to make a 20 mile trail for his people. He arrived in plenty of time to build a hut, and kill an animal for dinner. On his death bed, he called Muriel to him, held out his hand and passed the gift of speed onto her. Watching her get the bannock into the oven in record time, I have no doubt she is speedy.

As a medicine woman, she must be pure which means no alcohol so there is only positive energy around her. We were in the presence of a great woman. Only once when telling why her fingers are crooked because they were broken in residential school did her light waver briefly. She grew up at Great Bear Lake in the Slavey nation but was taken away at eight years to residential school. They broke her fingers because she wouldn’t quit speaking her language. Why do whites feel they have to change, Christianize or rescue other cultures? Why can’t they let them be? But she quickly turned the bad memories around and said, “I am a survivor because I have faith in God. I survived cancer five years ago. I want to carry on our traditions for the children. I nourish my life style. We can survive if we look after our food sources.” We’ve been hearing similar refrains the whole time we’ve been north of 60.

At 17 she lived in the bush for three months with her dogs, where she looked after two injured eagles that went on to protect her. One day a bear got a whiff of her kill from a hunt, started prowling around and the eagles heard him. They squawked and dove at him until he ran away.   Another time it had been raining for days so Muriel hadn’t been hunting. The eagle brought her two rabbits, one for her and one for her dogs.

This is but one of the many stories plus things about Canada you never knew. Arm-chair travellers, dreamers, or RVers all enjoy Barb’s books. Preorder yours today and receive the free gift.

2 thoughts on “RV Canada’s Far North on a Dream”